“Has the Lord as great delight in burnt offerings and sacrifices,
as in obeying the voice of the Lord?
Behold, to obey is better than sacrifice,
and to listen than the fat of rams.
For rebellion is as the sin of divination,
and presumption is as iniquity and idolatry.
Because you have rejected the word of the Lord,
he has also rejected you from being king.”

1 Samuel 15 begins a turning point in the Old Testament’s history of Israel. The Israelites have begged God for a king, so that they could become just like all of the other nations. God chose Saul to be the first king. However, since Saul chose to do things his own way and disobey God, he was rejected as king. In 1 Samuel 15, God declares that He has rejected Saul and will appoint a new king in his place (David, the ancestor of Jesus).

For the sake of brevity, I will simply summarize this chapter (you can read 1 Samuel 15 in its entirety on your own if necessary). God commanded Saul (through the prophet Samuel) to destroy the Amalekite nation. Saul did not fully obey God: he spared some livestock and the king.

God viewed Saul’s partial obedience as full disobedience. The consequences lasted for centuries. Since Saul chose to spare a few Amalekites, more survived. David ended up having to battle them in 1 Samuel 27:8 and 1 Samuel 30. Many commentators believe Haman the Agagite, the enemy of the Jews in the Book of Esther, was a direct descendant of the Amalekite king.

This verse came to mind recently while I was meditating on another Bible passage. In the Sermon on the Mount, Jesus said the following:

Modern-day Christians do not rely on sacrifice, in the Old Testament sense, as an element of our spirituality. We do not slaughter sheep and goats and roast them on an altar. We have other ways of serving God that have replaced sacrifice: evangelism, church ministry, worship, prayer, Bible reading, Bible teaching, tithing, fasting, etc. Yet, Jesus calls us to make healthy interpersonal relationships a higher priority than all of these things.

To obey God is better than sacrifice—or evangelism, or serving in the church, or worship, or prayer, or reading the Bible, or tithing, or fasting, or anything else we say we are doing for God.

To wilfully disobey God defiles the sacrifice or ministry. To do your own thing and ask God to bless it defiles the altar itself. “For which is greater, the gift or the altar that makes the gift sacred?” (Matthew 23:19). Far too often, we are tempted to decide to do our own thing and then ask God to bless it. Shortly before He was betrayed, Jesus prayed, “Father, if you are willing, remove this cup from me. Nevertheless, not my will, but yours, be done.” We are often tempted to instead pray, “Okay God, this is what I am planning to do. I ask You to bless it and provide what I need to succeed in this.” (Even worse, in some circles they do not ask God to bless or provide: they demand it, bossing the King of Kings and Lord of Lords around by “claiming” the blessing, often by twisting a verse of Scripture to mean what they want it to mean.)

God has called us to obedience and service. He is the Lord, which means our responsibility is to do exactly what He calls us to do. Many live with the desire to one day hear our Lord say, “Well done, good and faithful servant” (Matthew 15:21, 23). That commendation is reserved for those who obey God, not those who look for excuses to do things their way. May we always have a heart willing to hear the will of the Lord and obey.

For a closing thought, I will leave you with this classic song by Keith Green, inspired by this verse: 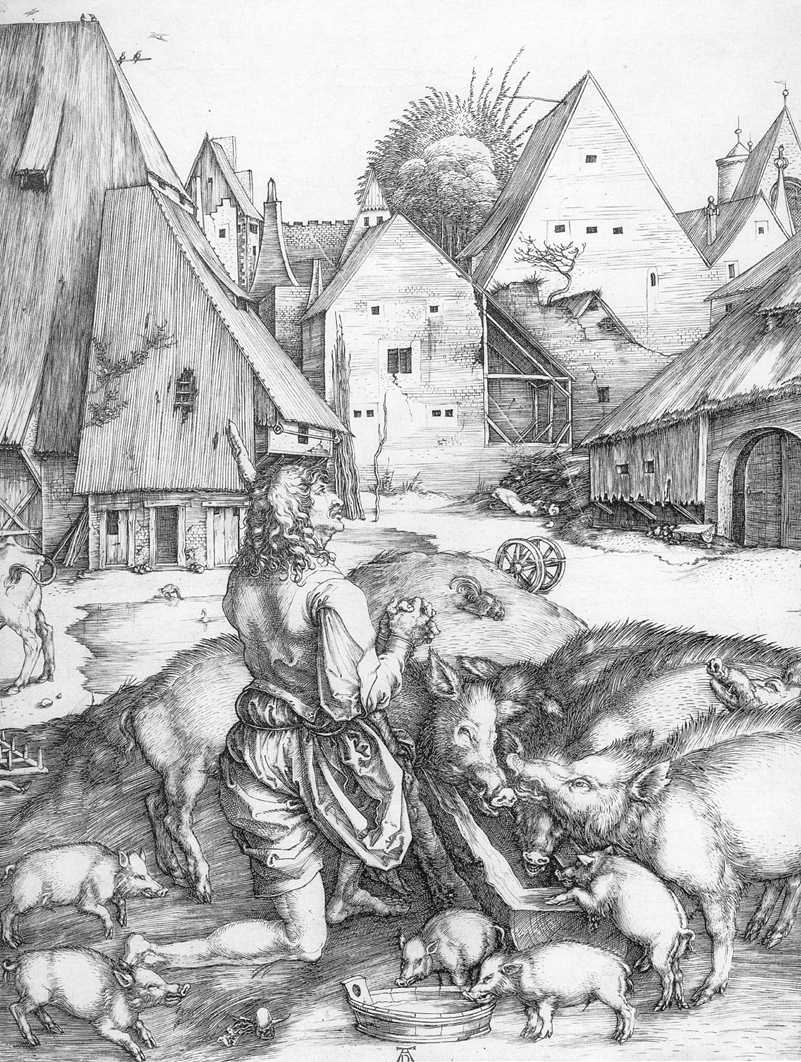 The younger son in Jesus’ parable fell into hard times when he chose to seek the father’s inheritance without the father’s blessing. Picture by Albrecht Dürer – Web Gallery of Art:   Image  Info about artwork, Public Domain, https://commons.wikimedia.org/w/index.php?curid=15393280

Far too often, I measure myself according to what I do, or what I have accomplished in life. This is probably part of the reason why many men my age go through a “mid-life crisis”: We reach a point when we realize we are in the later stages of our lives, and we do not see where we have made great accomplishments that will go down in history. Let’s face it: I know I will never play in a World Cup soccer tournament or have a number one record on the Billboard charts. I probably have a better chance of publishing a bestselling book, but most of my most elaborate dreams will not come true.

This emotional, existential affliction is not limited to 50-year-old men. Men and women of any age make the same mistake. We measure our worth according what we do. However, God is more concerned with who we are than with what we can accomplish.

While reading the parable of the Prodigal Son recently, I realized that both sons made the same mistake. They had a perspective on their relationship with their father that completely contradicted the father’s perspective. As a result, they missed out on much of what their father had to offer them.

The younger son chose to claim his inheritance without preserving his father’s presence. The parable begins with one of the worst insults a son could give his father: He wanted his inheritance, even though the father was still alive! Then, he took the money and ran, making a series of foolish choices and falling victim to misfortune. When he realized his bankruptcy, he decided to ask his father to hire him as a servant.

Many Christians want the privileges of a relationship with Jesus, without the actual relationship. How many want to go to heaven someday, but do not want to pray, or worship God, or serve Him now? “Let me say a sinner’s prayer, and maybe go to church (as long as it entertains me or makes me feel good about myself). Let me enjoy my life as much as possible right now, using God’s blessings to make me happy, and give lip service to Jesus Christ. He will give me everlasting life in heaven when I die, just because I said that sinner’s prayer once. When I go to heaven, maybe they’ll have wide-screen TVs!” (OK, I rarely hear people pondering televisions in heaven, but I think most of us imagine a vacation resort in the clouds, with little thought of Jesus.)

The older son made the opposite mistake. He stayed in the father’s presence, but he viewed himself more as a slave than a son. He measured his relationship with the father as a job, not a privileged position as a family member. In verse 29, he said to his father, “Look, these many years I have served you, and I never disobeyed your command, yet you never gave me a young goat, that I might celebrate with my friends.” How does the father respond? “Son, you are always with me, and all that is mine is yours” (verse 31). The father seems to be hinting, “You never asked! I would have let you have a goat so that you could invite your friends over for a party!” This son is willing to work like a slave, but does not realize that his father wants more from him: He wants him to think of himself as a son, with the privileges of that relationship, not as a servant with just a list of obligations.

I have to admit that I relate to this older son more in my relationship with Christ. It is easy for me to turn my faith into a to-do list. Have I prayed enough today? Have I read the Bible enough? Here’s a new ministry at church: I had better get involved, even though I’m already involved in a few other things.

The lesson for all of us is clear: Seek that relationship first. Spend time with your Father: Not out of obligation, but as a chance to build a relationship. When you receive a blessing from God (a better job, a healing, an answer to prayer), stay close to Him. Serve Him out of love, not as a slave, but as a son or daughter.

Both sons in the parable missed a blessing. They both needed to learn that their privileges were gifts from the father: undeserved; freely available if they would seek and ask; and best enjoyed in a relationship with Him.

These words come from a prophecy wherein God promises to restore the fortunes of His people, the Israelite tribe of Judah, to their own land after a period of exile. At the same time, though, they find greater fulfillment in the New Covenant.

Many Christians fall into a trap of forcing ourselves to live by man-made rules, trying to do so in our own efforts. “If I just try harder, I will kick this addiction all by myself. If I come up with stricter to rules to follow, I will not be tempted in this area of my life.” Okay, we may not say those exact words. Yet, how often are we tempted to believe that our rules or efforts somehow make us more spiritual, or more holy, or better equipped to be a better person? To some, it is not enough to try to live by the commandments that are clearly spelled out in the Bible; we need to add rules. “Don’t listen to that kind of music! Don’t drink that! Don’t go to movies or watch television!”

God has not called us to follow new rules. He calls us to be a new kind of person: One in whom His Holy Spirit can dwell. These verses provide three elements of the new birth we receive when we surrender to Jesus:

Part of growing in a relationship with Christ is recognizing what He has done for and in us and trusting Him to do His perfect work in us. At the same time, we have to recognize when the “old me” is popping up again. The old me can take many forms. It can be outright sinful behavior. It can be a bad attitude. It can be fear, worry, or anxiety. It can be bitterness or unforgiveness. When the old me emerges, I must remind myself of who I am in Christ, turn to Him, and allow His Spirit to guide me in the right direction.

When temptation comes, let us learn to lean on our Saviour and seek His strength to live the kind of life to which He calls us.