Why I March for Life

Now the word of the Lord came to me, saying, “Before I formed you in the womb I knew you, and before you were born I consecrated you; I appointed you a prophet to the nations” (Jeremiah 1:5-6, ESV). 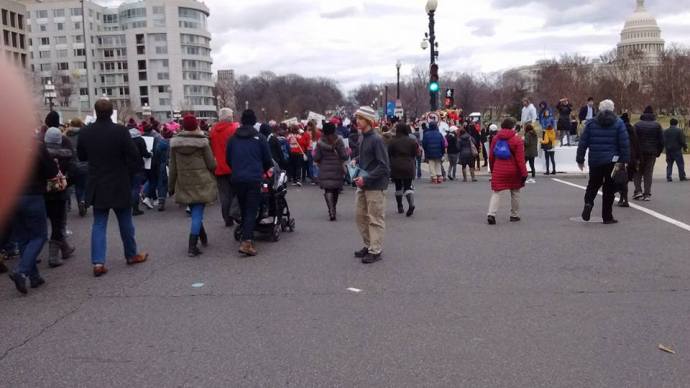 The view from within the March for Life as we paraded up Constitution Avenue. Photo by Michael E. Lynch

I joined a contingent from my church and several hundred thousand others in the March for Life in Washington, DC, on Friday, January 27.

Why would I march in this event? Although my company provides adequate vacation time, it is still finite and some people may think I could use my days having more “fun.” Spending nearly 12 hours on a bus (round trip), praying outside the Supreme Court while a small handful of protestors taunt us, and then walking down a street in cold winter weather (the real feel temperature was around 32° that day, which was better than some other years) may be rewarding, but it is not always fun.

First, let us dispense with the standard liberal accusation about why we march: We do not want to oppress women. Probably about one-half (maybe even more) of the participants are female. Some admit that they had babies aborted when they were younger and they now regret that decision. The “women’s rights” argument for abortion would make sense only if another human begin is not involved. Saying abortion is only about women’s rights is like saying that the American Civil War was only about the properly rights of white southerners.

However, another life is involved. When a woman becomes pregnant, her body becomes a sanctuary for another life: A life God has entrusted to her, to nourish, protect, love, and nurture. I can think of no more noble calling than that. The Bible tells us that God speaks of the preborn as if they are alive, calling some to fulfill His purposes while still in the womb [Jeremiah 1:5-6; see also the stories of Jesus, John the Baptist, and Judah (the father of the nation of Israel)].

My son was born two months premature in 1990. After a few rough days when his fate seemed questionable, his condition started to improve. While his mother and I rejoiced about his healing, a very different scene unfolded at the incubator across the aisle from my son. A pair of twins had also been born prematurely, and one’s condition was deteriorating. The parents were saying their good-byes to the smaller boy as he was dying. Tears streamed down the father’s face (he was a tall, rugged-looking guy who I cannot imagine being normally prone to tears). We could not bear to watch. I know we had one thing in common with that couple: We loved our newborn babies, had awaited their births eagerly, and I am sure we would willingly give anything to have healthy children. I am sure none of us could put a price tag on our babies’ lives.

While we prayed for our son and watched that family mourn theirs, I could not help but realize how precious our children were to us. Yet, in much of the country, debate raged (and continues to rage) over whether it would be legal to kill these babies in the womb at that stage of development. Society says that these babies’ value is determined by their mothers. If Mommy wants to keep the baby, he or she is a precious gift from God; if Mommy does not want to keep the baby, he or she is an inconvenience, “growth,” or parasite.

The world becomes dangerous when we determine a person’s value based purely on personal opinions. In the early days of our nation, people of African descent were considered somewhat less-than-human and could be bought or sold with no regard to their best interests. In Germany during the 1930s and 1940s, “ethnically inferior” persons and people with handicaps were considered a cancer upon society, so any means deemed necessary was used to cleanse the nation. The list goes on.

So, I stand and march for life in defense of the most vulnerable in our society. I march to preserve the dignity and value of all human life, from conception until natural death. Last of all, I march in memory of those children whose parents, against their wishes and for reasons known only by God, did not have the pleasure of watching their children grow up in this world.

2 thoughts on “Why I March for Life”