His brothers also came and fell down before him and said, “Behold, we are your servants.” But Joseph said to them, “Do not fear, for am I in the place of God? As for you, you meant evil against me, but God meant it for good, to bring it about that many people should be kept alive, as they are today. So do not fear; I will provide for you and your little ones.” Thus he comforted them and spoke kindly to them (Genesis 50:18–21, ESV). 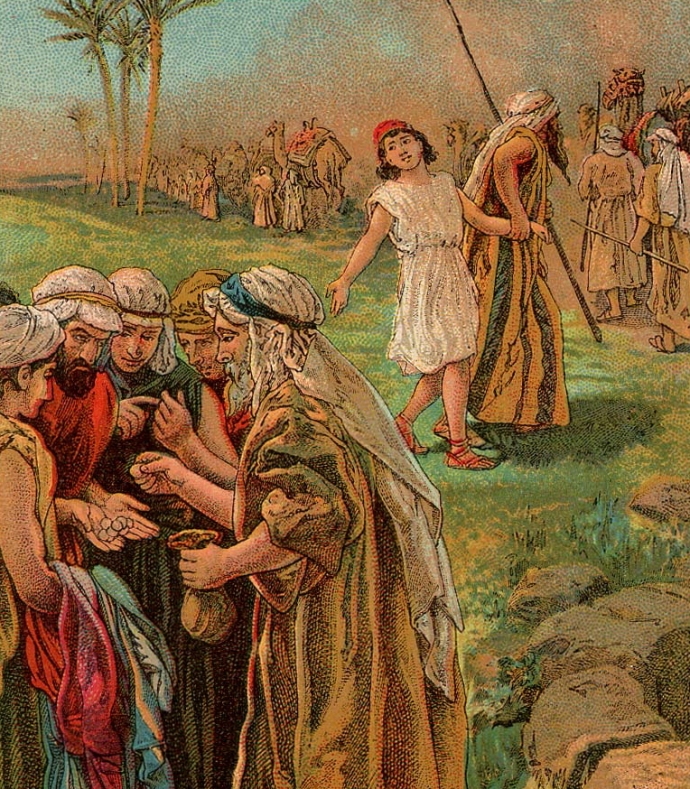 Joseph’s story did not start well, as he was sold into slavery by his brothers. Illustration from a Bible card published by the Providence Lithograph Company, via Wikimedia Commons.

The last fourteen chapters of Genesis focus mainly on the life of Joseph, the eleventh son of Jacob (also known as Israel). Genesis, the first book of the Bible, begins by describing the origins of the human race, before focusing in on the birth of the nation of Israel. It also chronicles the faith journeys of several key patriarchs, particularly Abraham and Jacob. With Joseph, it describes his development as a man of God and as a leader.

Genesis depicts Joseph as the first Israelite to emerge as a world leader. As a youth, he dreamed that his brothers and parents would one day bow before him (Genesis 37:5–11). By the time that actually happened, he was a changed man, equipped by God to lead. He started with dreams and ambition. He developed through God’s leadership training program, and found himself in a place where he could serve others for God’s glory. This should be the pattern for all Christians who seek to become leaders, whether in the church or in secular institutions.

At the beginning of his story, Joseph did not look like he was destined for greatness. Since he was the eleventh of twelve sons, it would be assumed in his culture that he would rank near the bottom of the family’s social order. His status in the family took a downward spiral as sibling rivalry gave way to complete hatred. Joseph brought a “bad report” about four of his brothers to his father after they had pastured their flock together. Did he have to bring the bad report, or was he trying to score points with Dad to get special treatment? If Joseph was trying to win his father’s favor, he succeeded. Jacob gave him a robe of many colors (Genesis 37:3), which showed Joseph’s status as “dad’s favorite.” (A note to the fathers and grandfathers out there: It is one thing to treat your children differently because they are unique individuals; it is not OK to play favorites.) Before long, all of the brothers conspired to sell Joseph to slave traders (who eventually sold him to an officer of Egypt’s Pharaoh), telling their father that he had been killed by a wild animal.

Joseph was not off to a good start on the path to power and prestige. Playing off of favoritism to build yourself up by tearing others down tends to backfire. It may bring short-term benefits, but it usually backfires in the long term.

Now, let us fast-forward many years. Joseph began to show some genuine potential while in Egypt, but he cycled between opportunities and setbacks. His master promoted him to be head of all his household slaves. Then, he was falsely accused of sexual assault and imprisoned. He earned the respect of the jailer, who put him in charge of the other prisoners. He interpreted dreams for two of Pharaoh’s servants, thereby showing that he had divinely inspired wisdom. Finally, after years of hardship and disappointment, Pharaoh needed someone to interpret dreams for him. Pharaoh’s cupbearer remembered the gifted dream-interpreter and recommended him to Pharaoh. Joseph not only interpreted Pharaoh’s dreams (a warning that a severe famine would come upon the land), but proposed a way to prepare for it so that the people would survive. Pharaoh appointed Joseph to administer his economic programs.

Joseph had endured a turbulent journey: from favorite son and despised bratty tattle-tale brother; to slave; to prisoner; to the top of an empire’s government. The man who was exalted by Pharaoh was not like the boy who had been rejected by his shepherd brothers. Pharaoh may have ordered people to bow before Joseph, but Joseph was more concerned about serving those God had placed under his care.

His brothers would bow before him several times, but that was not Joseph’s big concern. In Genesis 50, after Joseph had brought the family to Egypt so he could provide food for them, his father died. His brothers though he might seek revenge, now that he had power and nobody could not stop him. However, Joseph had learned God’s design for leadership. He did not need them to bow before him. His title did not matter. He did not see himself as the Egyptian ruler who could seek revenge: He was God’s servant, called to serve others.

Joseph’s focus was on God’s purposes: “Do not fear, for am I in the place of God? As for you, you meant evil against me, but God meant it for good, to bring it about that many people should be kept alive, as they are today.” Joseph no longer thought about how he could gain power and how others would honor him. Instead, he wanted to know God’s will. What was God doing? How can God bring good out of this situation? What could he do to manifest God’s will? These are the questions every leader should ask when facing difficult circumstances.

Instead of seeking his brothers’ respect, Joseph was committed to providing for his brothers and their families. True leaders look for ways to build others up and make sure their needs are met.

Most importantly, Joseph forgave his brothers. Great leaders are not so obsessed with their feelings or what others have done to them that they forget their mission. God had entrusted Joseph with an important job, which would ensure that his family would fulfill the covenant God had made with Abraham (Genesis 12:1–3). Christ calls His disciples to forgive others, and leaders—especially Christian leaders—must exercise patience and not allow insults or offenses to derail them from God’s plan:

Good sense makes one slow to anger,
and it is his glory to overlook an offense (Proverbs 19:11).

Joseph had grown beyond the pride and impulsiveness of youth to become the prototypical servant leader. He could remain focused on his mission, seek to provide for those below him, and forgive others so that negativity would not derail his mission. This is God’s call for all who seek to be leaders or make a positive impact on their world.