“Stand therefore, having fastened on the belt of truth, and having put on the breastplate of righteousness, and, as shoes for your feet, having put on the readiness given by the gospel of peace” (Ephesians 6:14–15, ESV). 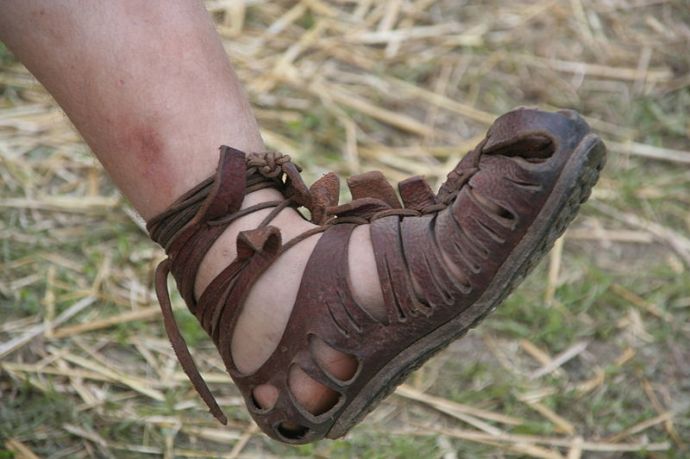 A Roman soldier’s boot. Photo by Matthias Kabel, via Wikimedia Commons, under a Creative Commons 3.0 license.

According to an article on a shoe company’s website, the average man owns 12 pairs of shoes, whereas the average woman owns 27. Both numbers seem extravagant to me: I own about seven pairs (if you count two pairs of winter boots and a very old pair of sneakers that I only wear while at home). Yet, most people can see the purpose of owning multiple pairs. Both fashion and functionality matter with footwear. I may wear a pair of black dress shoes to church or other occasions where more formal wear is expected. Sneakers or athletic shoes are acceptable for more casual settings; they are essential for athletic activity. If you participate in several sports, you may need different kinds of footwear for different activities: track shoes, tennis shoes, soccer cleats, basketball shoes, etc. We can probably count ice skates as “shoes” for playing hockey.

A Roman soldier’s boots (“caligae”) were, in some ways, similar to a modern cleat. They were designed to provide traction and stability while allowing the soldier to walk, run, or march comfortably and quickly. His shoes or boots were designed for warfare. They were intended to help him stand firmly in battle. As Christians serve in the army of God and engage in spiritual warfare, we need to wear the shoes or boots that provide “the readiness given by the gospel of peace.”

We wage war to advance that gospel of peace. We should be viewed as a threat in the spiritual realm, overthrowing the powers of darkness, confident that the gates of hell will not stand against us (Matthew 16:18). However, as we wage our warfare, we should treat the people around us like prisoners of war, to whom we have come as a liberating army that has overpowered their oppressors. Certainly, many we encounter will view us as the enemy; as the father of lies, Satan has deceived them into thinking that they are free when he really has them in chains of deception. We have come to break those chains with the truth of the gospel of peace.

“For he himself is our peace, who has made us both one and has broken down in his flesh the dividing wall of hostility by abolishing the law of commandments expressed in ordinances, that he might create in himself one new man in place of the two, so making peace, and might reconcile us both to God in one body through the cross, thereby killing the hostility. And he came and preached peace to you who were far off and peace to those who were near” (Ephesians 2:14–17).

The gospel is a message of peace and reconciliation. Paul says that Jesus Himself is our peace. He is the one who has broken down the wall of hostility between us and God. Through Christ, we have peace with God.

Jesus also brings peace to people of all nations, races, and tongues who will call upon His name for salvation. The Old Testament Law is broken down so that it no longer divides Jews from Gentiles. The love of God should tear down the walls that separate us along racial and ethnic lines; the fact that Sunday morning can still be called “the most segregated time of the week in America” should give us cause for concern. It should propel us to our knees in prayer and repentance so that we are fit to march forth in victory. When addressing the temptation to seek revenge, Paul writes:

We are called to pursue peace even with those who have hurt or offended us. How much more should we live at peace with those who are merely different from us?

We are called to show the peace of God in our relationships with others and to march forth with the good news of deliverance in Jesus Christ. Quoting Isaiah 52:7, Paul writes:

God has given us our marching orders. The gospel we believe is also the pair of boots we wear as we march forth to proclaim liberty to the captives. Christ has already won the war. We march forth against a defeated foe (Satan and his demons) as they maintain their final futile effort at resistance. We have received the gospel of peace, with which we can join Jesus in His mission of destroying the works of the devil and advancing the kingdom of God in the hearts of people. Let us march forth today to let people know that freedom and life are available to them in Christ Jesus. Like cleats on a soccer field, the gospel of peace will keep us standing securely as we march forth.