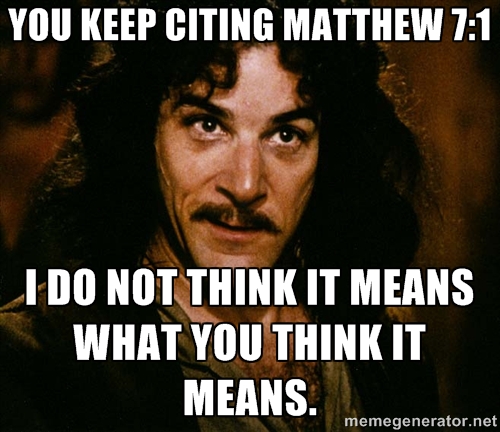 In last week’s Scripture Sabbath challenge, I discussed Philippians 4:13, particularly considering how many believers claim this verse without considering its context. This week, I would like to take a few minutes to look at a verse that is probably abused even more frequently by ignoring its context. Jesus’ instruction, “Do not judge,” is abused even more frequently, since the misapplication comes from those who are in open rebellion against God. Regrettably, many Christians have swallowed the bait of falsehood that has been presented to them.

Every Christian has fallen victim to this lie of the devil. (Yes, I will go so far as to call it demonically-inspired.) You say, “I believe in the sanctity of all human life and believe abortion is a sin.” The response: “Remember, Jesus said, ‘Do not judge.’” Or, you might say, “I believe in traditional marriage, between one man and one woman.” You hear the same response.

Do those who tell us that we cannot judge really believe it is an absolute rule that we can never say that something is immoral or wrong? Many of the same people who tell Christians that Jesus told us not to judge are quick to judge certain actions: Do they believe an adult should have sexual relations with a five-year-old? Do they think we should abuse animals? Do they think history has been too hard on Adolf Hitler, and maybe we should just assume he was doing what he thought was best for his nation? Can we murder? Can we steal? Is it wrong to own slaves, or to force teenage girls to be sex slaves? Many of the same people who will accuse Christians of being judgemental can get pretty vocal about these things.

It is a form of demonic deception. In Genesis 3, we read how the serpent (Satan) tempted Eve. He tricked her into believing that God’s command (you shall not eat from the tree of the knowledge of good and evil) was not true, or that it meant something different from what God had said. (Note that, in Genesis 3:3, Eve says that God forbade them from even touching the tree. God only said they could not eat its fruit. Adam and Eve were probably allowed to pick the fruit and throw it at the serpent’s head.)

Today, Satan has hijacked Matthew 7:1 away from Jesus and the church, and Christians have abdicated their authority to proclaim God’s word to the world. It has reached a point where many ministers are afraid to even confront sin amongst Christians, thereby failing to fulfill the last part of the Great Commission (“teaching {disciples} to observe all” that Jesus commands).

To understand the passage more clearly, let us look at the context (Matthew 7:1–6):

“Do not give what is holy to dogs, and do not throw your pearls before swine, or they will trample them under their feet, and turn and tear you to pieces.”

How does this passage affect how we speak about sin?

It is true that some Christians go too far and focus too heavily on the sins of others. However, we have an obligation to proclaim God’s word, to show people their need of a Saviour, and to invite people to repent and come to Jesus for salvation. Let us fulfill Christ’s calling and not surrender our authority to the father of lies.

This post was written as part of the Scripture Sabbath Challenge.

5 thoughts on “Judge Not”